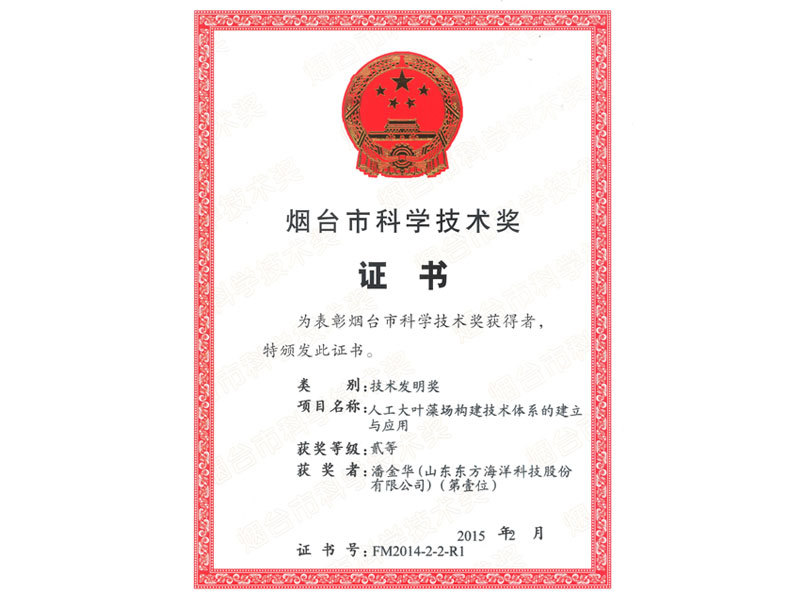 On the morning of March 4, 2015, the city's science and technology award conference was held in Dongshan Hotel, to commend the units and scientific and technological workers who have made outstanding contributions to the city's scientific and technological undertakings. Zhang Jiangting, Secretary of the Municipal Party Committee, attended the meeting and presented awards to the representatives of the units that won the 2014 Science and Technology Cooperation Award and Science and Technology Innovation Award. Deputy Secretary of the Municipal Party Committee and Mayor Meng Fanli delivered a speech, and city leaders Li Shuqin and Zhang Yongxia attended the meeting.

The Shandong Province Science and Technology Development Plan (NO: 2010GSF10612) "Establishment and Application of the Construction Technology System of Artificial Macroleaf Algae Farm" independently undertaken by Shandong Oriental Ocean Technology Co., Ltd. won the second prize of Yantai Science and Technology Award - Technology Invention Award" (Main contributors: Pan Jinhua, Jiang Xin, Li Xiaojie, Han Houwei, Peng Jie, Cui Cuiju) The seagrass ecosystem is an important primary productive force in the marine nearshore ecosystem, which is important for maintaining the balance of the nearshore marine ecosystem and promoting the stability of fishery resources. , It is of great significance to maintain the health of the fishery and breeding environment. However, due to the influence of various human and natural factors, the global seagrass farms are showing a trend of aggravating the decline. The healthy development of the offshore fishery economy. The project has been successfully promoted and applied in our company's Laizhou branch and Yantai Defenghai Treasures Co., Ltd. (Danzi Island), and established a large-leaf algae farm ecological restoration demonstration base, which is conducive to promoting our company's sea cucumber bottom. It is of great significance to the stability of sowing and breeding, and the ecological health and safety of sea cucumbers. The research results and application value of this project have been highly appraised by the Shandong Provincial Department of Science and Technology and industry peers. The project has been recommended by the Yantai Municipal Science and Technology Bureau for application in Shandong Province Science and Technology Award. The successful research and development of this project has laid a solid foundation for the restoration and construction of the ecosystem of the northern coastal seaweed farms in China. The healthy and sustainable development of the blue peninsula fishery economy has a potential driving effect that cannot be ignored.