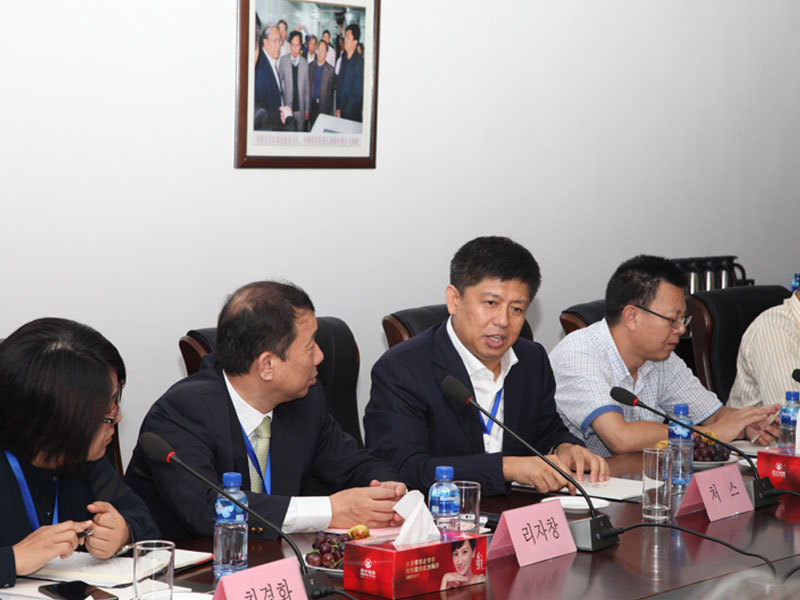 Co-hosted by Tsinghua University Education Foundation, School of Continuing Education and Local Administration Training Institute of the Korean Ministry of Administration and Self-Government, and organized by Shandong Oriental Ocean Group Co., Ltd., China-Korea International Forum on "Opportunities and Challenges in the Internet Age: Improving Social Governance and Serving People's Health" It was successfully held in Yantai on September 8. On September 9, the guests who participated in the China-Korea International Forum visited the Oriental Ocean. After visiting the Oriental Ocean, the guests were full of praise for the high-tech aquaculture technology and deep processing capabilities possessed by the Chinese fishery company. I deeply admire the company's advanced large-scale circulating water automatic aquaculture system for salmon. This visit has enriched the activities of the China-Korea International Forum.

The China-Korea International Forum has been held for nine sessions since 2007. Well-known experts, scholars and officials from the two countries, including a number of academicians from the Chinese Academy of Sciences and the Chinese Academy of Engineering, gathered in Yantai to focus on "How Internet+ serves local governance", "How does the Internet age serve people's health", and "How to develop China and South Korea in the Internet age". Cooperation” and other topics.

Yantai and South Korean local governments have a lot of cooperation in social, economic and cultural aspects. South Korea has become Yantai's No. 1 import and export trade country, source country of imported goods and source of foreign capital. From January to July this year, Yantai's import and export to South Korea achieved US$6.51 billion, an increase of 8.6%; more than 10 key Korean-funded projects with a total investment of more than US$30 million are under discussion, with a total investment of more than US$2 billion. Looking to the future, Yantai, as an important node city of my country's "Belt and Road" strategy, plans to build the China-Korea (Yantai) Industrial Park, which is an important platform and carrier for the perfect combination of the "Belt and Road" strategy and the "Eurasian Initiative".

As a leading fishery enterprise cultivated by Shandong's construction of "marine granary", Oriental Ocean has always adhered to the development idea of ​​"science and technology", cooperated with Ocean University of China, Institute of Oceanography, Chinese Academy of Sciences and other large institutes, and has the national seaweed and sea cucumber engineering technology research There are more than 10 national and provincial scientific and technological innovation platforms such as the center. At present, it has 48,000 mu of seabed pastures, forming a complete industrial chain of seafood farming, aquatic product processing, aquatic product cold chain logistics storage, etc., and has deep processing capabilities such as using high-tech deep processing seafood to become collagen. It took the lead in introducing the Norwegian Atlantic salmon factory farming technology and equipment in the country, and created a circulating water automatic farming system with independent intellectual property rights and international advanced level. The farming scale has reached 80,000 square meters. At the same time, Dongfang Ocean has also completed the genome sequencing and mapping of the world's leading kelp organisms. At present, the company is seeking technology and cooperation around the world, including high-tech marine biotechnology, to move towards a more rational and in-depth development of marine resources.

In the industrial structure of South Korea, fishery also occupies an important position. The main products of Oriental Ocean, such as sea cucumber, collagen, and precious fish, are easy to connect with South Korea's dietary structure and food ingredients market. The guests who participated in the China-Korea International Forum this time were full of praise for the high-tech aquaculture technology and deep processing capabilities possessed by the Chinese fishery company after visiting the Oriental Ocean. I deeply admire the company's advanced large-scale circulating water automatic aquaculture system for salmon.

The guests of this China-Korea International Forum include: Zhu Luorong, President of the Local Administration Training Institute of the Ministry of Civil Affairs and Self-Government of the Republic of Korea (Minister of Civil Affairs), Lin Caihu, Standing Committee Member of the Korea Personal Information Protection Committee (Minister of Civil Affairs), and Sun, President of the Korea Regional Information Development Institute Lead Technology (Minister of Civil Affairs), Kim Fawan, Professor of the Department of Medicine, Kyungpook National University, South Korea, Lyu Chung-hye, Counselor of the Embassy of the Republic of Korea in China, Gu Binglin, former President of Tsinghua University, Academician of the Chinese Academy of Sciences, and member of the Standing Committee of the National Committee of the Chinese People's Political Consultative Conference, Academician of the Chinese Academy of Sciences, China Science and Technology Rao Zihe, Member of the Standing Committee of the Association, Zhao Weiming, Deputy Secretary of the Party Committee of Harbin Medical University, Li Jiaqiang, Deputy Secretary General of Tsinghua University and Secretary General of the Education Foundation, Gao Celi, Dean of the School of Continuing Education, Meng Zhihe, Deputy Dean of Tsinghua University, Zhang Wenxue, Deputy Secretary of the Party Committee, Tsinghua University Wang Zhiqiang, Deputy Dean of the Cross-Strait Development Research Institute, Yang Li, Deputy Mayor of Yantai City, Wang Shuyun, Dean of the School of Economics and Management of Yantai University, etc.

Background of the China-Korea International Forum:

When Tsinghua University and the Local Administration Training Institute of the Korean Ministry of Self-Government and Self-Government first held the event in 2007, the purpose of the event was to focus on major issues in the economic and social development of Northeast Asia, and to bring together policy makers and think tanks from China and South Korea. , and actively explore solutions to promote the prosperity, stability and coordinated development of the Northeast Asian economy. Over the past nine years, the "China-Korea International Forum" has focused on global economic and social hotspot issues, and has focused on "Regional Balanced Development", "National Competitiveness and Regional Development Strategy", "Influence and Response to Financial Crisis", "National Competitiveness Enhancement and Regional Development Strategy". Development Strategy", "Strengthening the Administrative Capability of Local Governments", "Risk Management and Local Competitiveness Improvement", "Promoting Administrative Collaboration and Strengthening Public Safety", "Improving the Service Level of Local Governments and Improving the People's Quality of Life", "Innovation in the Internet Age" Opportunities and Challenges: Improving Social Governance, Serving People's Health" as the theme, many beneficial exchange results have been formed, which have played a positive role in promoting exchanges and cooperation between China and South Korea in the political, economic and cultural fields. Each year's forum theme is full of contemporary, ideological and forward-looking. Each forum has been widely recognized by China and South Korea and all sectors of society.