Wu Cuiyun, Member of the Standing Committee of the Provincial Party Committee and Minister of the United Front Work Department, visited the Oriental Ocean 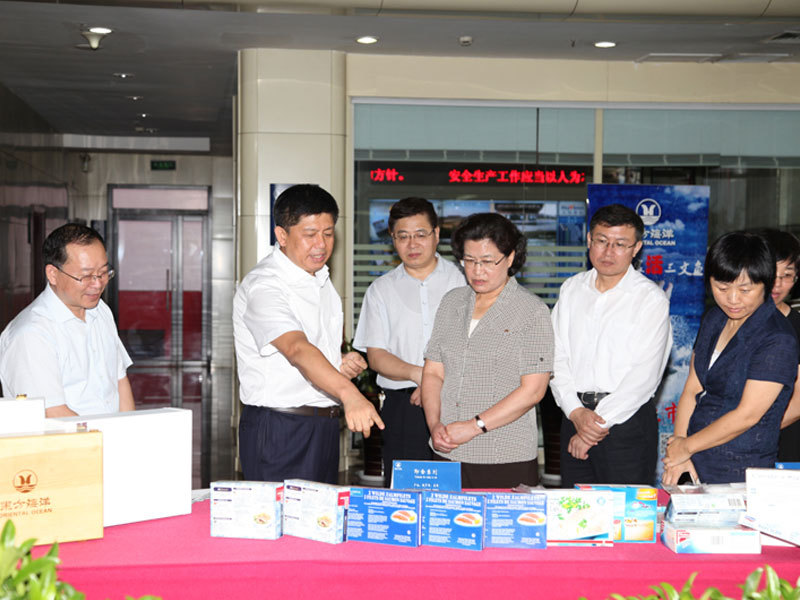 As a leading fishery enterprise cultivated by Shandong's construction of "marine granary", Oriental Ocean has always adhered to the development idea of ​​"science and technology", cooperated with Ocean University of China, Institute of Oceanography, Chinese Academy of Sciences and other large institutes, and has the national seaweed and sea cucumber engineering technology research There are more than 10 national and provincial scientific and technological innovation platforms such as the center. At present, it has 48,000 mu of seabed pastures, forming a complete industrial chain of seafood farming, aquatic product processing, aquatic product cold chain logistics storage, etc., and has deep processing capabilities such as using high-tech deep processing seafood to become collagen.

In recent years, they have delved into the processing of marine products into convenient ingredients of various flavors. A variety of instant ready-to-eat products, including manta roe in chicken wings, are widely welcomed by the market.

Oriental Ocean's "National Seaweed Engineering Technology Research Center" has achieved fruitful research on seaweed, and has established close cooperative relations with more than 10 universities and colleges at home and abroad. It has jointly established a marine biological resource utilization technology center with the Yantai Institute of Coastal Zones of the Chinese Academy of Sciences, and jointly established a marine food research and development center with Ocean University of China and other scientific and technological innovation platforms for industry-university-research cooperation. It has undertaken a number of national scientific research and achievement transformation projects, such as 9 national science and technology support plan projects, 4 863 plans, and 4 marine public welfare projects of the State Oceanic Administration. 19 national patents have been authorized. Relevant achievements have won 5 provincial and ministerial awards. In terms of the development of improved kelp varieties and breeding technology, the kelp breeding technology in my country has been developed from the sporophyte level to the cell level, and the direct utilization of heterosis has been realized for the first time; at the same time, the kelp cultivation has been developed from the population level to the cell engineering level. The transformation of traditional technology to modern biotechnology; successively cultivated new varieties of kelp such as "901", "Dongfang No. 2", "Dongfang No. 6", popularized and applied more than 600,000 mu, and increased the income of kelp cultivation households by 1.5 billion yuan. . Recently, Oriental Ocean has also completed the genome sequencing and mapping of kelp organisms, and this innovation is also at the forefront of the world.