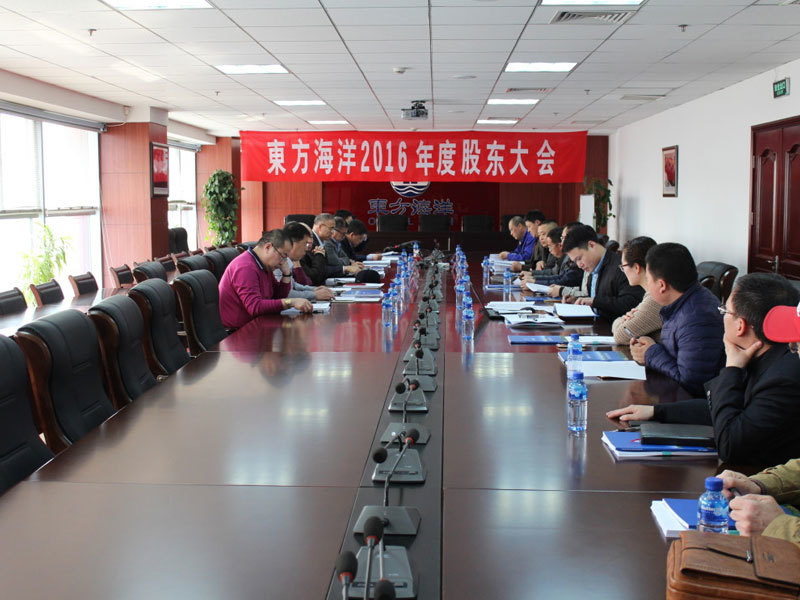 A few days ago, the annual general meeting of shareholders of Oriental Ocean was successfully held. All the proposals including the first phase of the employee stock ownership plan were passed with high votes. The meeting was presided over by Mr. Che Shi, the chairman and general manager of the company. Mr. Li Cunming, director of the company, made a report on the work of the board of directors. Three representatives of small and medium-sized investors and shareholders came to the scene from thousands of miles away, highlighting the importance that ordinary investors place on the company.

In addition to auditing the usual proposals such as the 2016 annual report, the meeting also audited the first-phase employee stock ownership plan of Orient Ocean, and all proposals were approved with a high vote. Shareholders' trust in the company is unmistakable. All of this comes from not only the recognition of the company's correct strategic layout, but also the recognition of the company's diligent operation. In 2016, the performance of Oriental Ocean has been greatly improved. Realized revenue of 707 million yuan and net profit of 76.6771 million yuan, an increase of 4.76% and 53.36% year-on-year respectively.

The first phase of the employee stock ownership plan approved by the annual general meeting of shareholders is as follows: the total amount of funds raised shall not exceed 170 million yuan. After the establishment of the shareholding plan, China Resources Shenzhen International Investment Trust will be entrusted to manage it and fully subscribe for the inferior shares of the trust plan established by it. The trust plan establishes priority shares and inferior shares in a ratio of no more than 2:1, and the total amount of funds raised does not exceed 500 million yuan. Shandong Oriental Ocean Group Co., Ltd., the major shareholder of the listed company, acts as the obligor to make up the final balance. The main investment scope of the trust plan is Orient Ocean stocks, and it is not used to purchase stocks of other companies. The lock-up period of this employee stock ownership plan is 12 months, which is calculated from the time when the company announces the last transfer of the underlying stock to the name of the trust plan established by the trust company. The duration of the employee stock ownership plan shall not exceed 18 months, which shall be counted from the date of completion of the establishment of the trust plan. Subsequent extensions can be made according to the actual situation.

Within 6 months after the company's general meeting of shareholders approves the employee stock ownership plan, the trust plan will complete the acquisition of the underlying shares through specific products, secondary market purchases, block transactions and other methods permitted by laws and regulations. The holders of this employee stock ownership plan are mainly: directors, supervisors and senior managers of listed companies; core and key employees of listed companies and their subsidiaries.

The big health department has become a bright spot

Different from previous years, 2016 is the first year of Oriental Ocean's great health, and the work report of the board of directors has focused on this. It is understood that in 2016, HIV and HTLV in the big health business unit brought 62.8790 million yuan in revenue and 29.0454 million yuan in net profit to the company.

Specifically, the company's current major health business is as follows:

Avioq in the United States: Avioq's main products include diagnostic reagents such as HIV-I/II (AIDS), HTLV-I/II (leukemia), etc. The products are mainly sold to the United States, the European Union, Africa and other countries and regions. Among them, HIV-I reagent passed FDA certification in 2009; HTLV-I/II reagent passed FDA certification and CE certification in 2012, and obtained sales approval from Health Canada in 2013. In addition, Oral Fluid Collection independently developed by Avioq Device (saliva collector) has obtained the patent authorization of the US Patent Office, and has developed the sixth-generation HIV (AIDS) diagnostic reagents (applying for FDA certification) and a new generation of multiple joint blood screening products, among which the sixth-generation HIV (AIDS) ) Diagnostic reagents can simultaneously detect and diagnose HIV-I and II types, type and determine the time of infection, and the reagent testing technology has reached a leading position in the world.

The precision medical science and technology park invested and constructed by the company is supported by Shandong Province as a provincial key project.